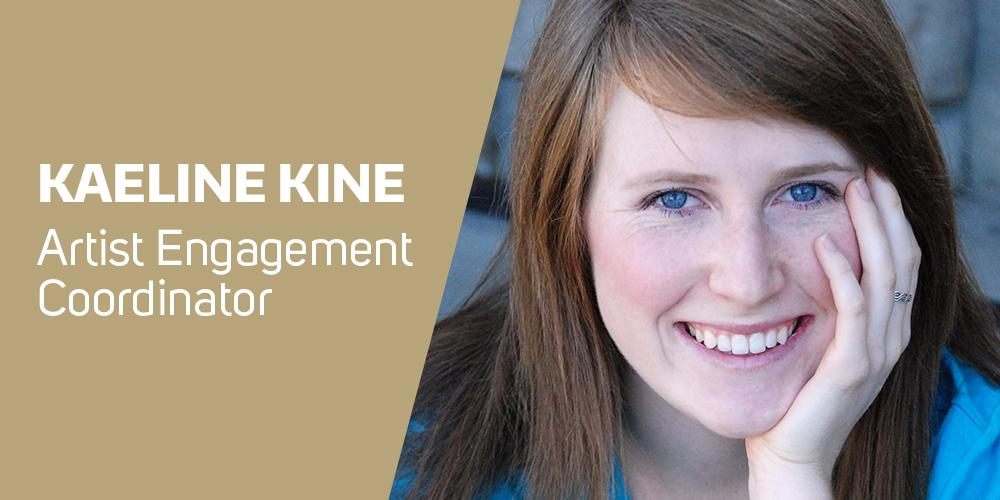 So why is Kaeline working behind the scenes at Meany Center instead of appearing on the Meany stage?

“I have always loved to perform,” she says, “but over the years I’ve become more interested in facilitating art than in being onstage myself.”

As Meany Center’s Artist Engagement Coordinator, Kaeline has plenty of scope to do just that. In any given day, she might be making hotel and travel arrangements for a string quartet; exchanging email with an artist’s manager about whether or not the performer is willing to participate in a Green Room toast with donors after the show; driving members of a world music group to a local community center for a free concert; or keeping track of the complicated logistics involved in presenting a Chinese dance company.

It makes sense for a woman who, as a child, wrote a name poem in which the two E’s in her name stood for “Energetic” and “Eclectic.”

From elementary through middle school she played piano, flute and orchestral percussion. In high school, she joined the show choir and studied dance. When she decided to go to college for the performing arts, a family member told her to “Get a real degree.” So she ended up double-majoring in theater and business with a minor in music.

After graduating from University of Puget Sound, she came to Seattle and interned first in the Seattle Children’s Theatre Drama School and then at the Seattle Repertory Theatre. Then-Managing Director Ben Moore recognized that just one job would not be enough for Kaeline, so he rearranged her internship to allow her to work on one project in every department over her nine-month stint. From there she went on to work as a free-lance stage manager, sound designer, and teaching artist for companies all over Seattle, joined the all-volunteer staff of Annex Theatre as a production manager, and eventually landed at Seattle Shakespeare Company as their events manager.

A steady diet of production management taught her that she got real joy out of taking responsibility for the whole picture, and managing the logistics so that the artists could focus on just their own creative work. “I love being around creative people,” Kaeline says. “I love collaborating, problem solving and being directly involved in making the magic happen.”

However, after a few years immersed solely in theater, Kaeline began to miss the other performing arts she’d left behind. Her work at Meany Hall satisfies that longing — “It has everything but theater!” Kaeline points out.

And because she is nothing if not energetic, Kaeline is keeping a hand in the theater world as well, production managing festivals and taking on the occasional free-lance sound design project. “I like to keep busy,” she says.

Energetic and Eclectic.  If you happen to run into Kaeline at Meany Hall one of these evenings, you might ask her what the other letters in her name poem stood for...