Brian Brooks is the inaugural Choreographer in Residence at Chicago's Harris Theater for Music and Dance, a three-year fellowship that includes commissions for new works for Hubbard Street Dance Chicago, Miami City Ballet, and his own New York-based group. In addition to the Mellon Foundation Creative Artist Fellowship, awards include a Guggenheim Fellowship, Joyce Theater Artist Residency, and NY City Center Fellowship. Brooks’ company has toured internationally since 2002 with presentations by American Dance Festival, BAM’s Next Wave Festival, The Joyce Theater, Jacob’s Pillow, and Lumberyard Performing Arts, among others.

After being commissioned by Damian Woetzel/Vail International Dance Festival to create First Fall with former NYC Ballet Principal Wendy Whelan, Brooks and Whelan have collaborated since 2012, recently touring a duet evening accompanied by the string quartet Brooklyn Rider. Brooks has choreographed off-Broadway productions at Theatre for a New Audience, including A Midsummer Night’s Dream (2013), directed by Julie Taymor, and Pericles (2016), directed by Trevor Nunn, and has created dances for Ballet Tech, The Juilliard School, Boston Conservatory, The School at Jacob’s Pillow, and Harvard University. He teaches extensively at colleges and universities across the U.S. and served as a Teaching Artist at Lincoln Center Education for 12 years.

Project Description
During his year of creative research in conjunction with the Meany Center and the University of Washington, choreographer Brian Brooks explored the imagined space between performer and observer. Working collaboratively with Seattle-based physicists and programmers of virtual reality, Brooks investigated dance beyond the body and art-making in the digital frontier.

In collaboration with Seattle-based startup, Omnivor, Brian Brooks is creating a durational installation work using volumetric video and augmented reality to ignite virtual spaces around what audiences see on stage. The installation can be experienced in a theater lobby or gallery before/after performances or during intermission.

The work is experienced through a free app that individuals can download on phones or tablets and that projects the dancers onto the gallery walls and ceilings. While the installation is designed to accompany staged performances, it could also enable those who can't be present in the theater to engage with the work. Through the app, the installation could be projected anywhere – living rooms, schools, residential facilities, etc.

To facilitate the experience, the company plans to travel with two WiFi access points to enhance connectivity at the venue and five iPads for those who are not able to download the app onto a personal smartphone.

Brooks is working with computer scientists in Seattle and New York City to develop a rule-based, movement analysis application using motion-capture equipment that can be used by choreographers and dancers to support creative inquiry.

Using motion capture sensors to gather layered movement data, the program will translate complex human movement into written statistics and animated graphics. While this information will illuminate our impulses and patterns, the program also will teach itself – generating original sequences based on, or contradicting, the data.

The application will have three primary functions:

Brian Brooks and students from UW Department of Dance experimenting with 360 video, September, 2018. 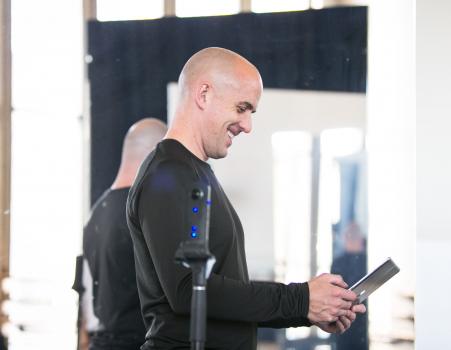 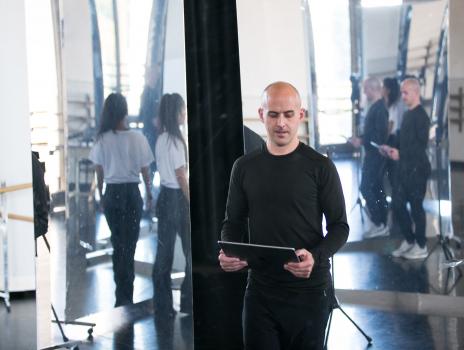 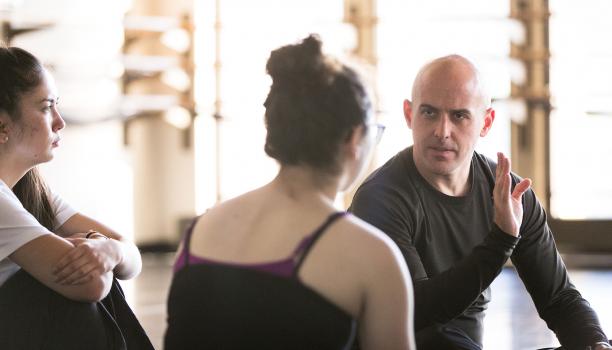 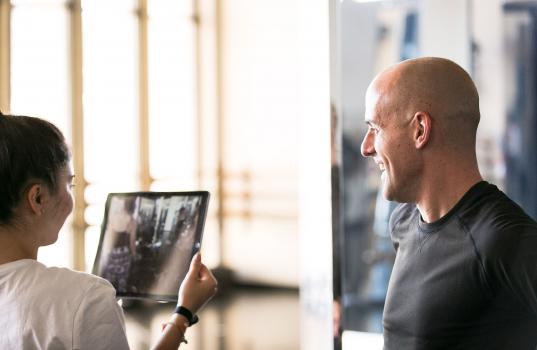 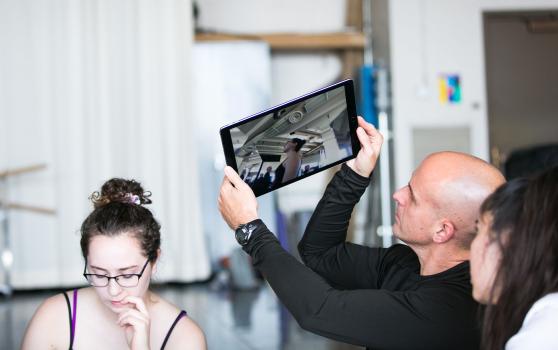