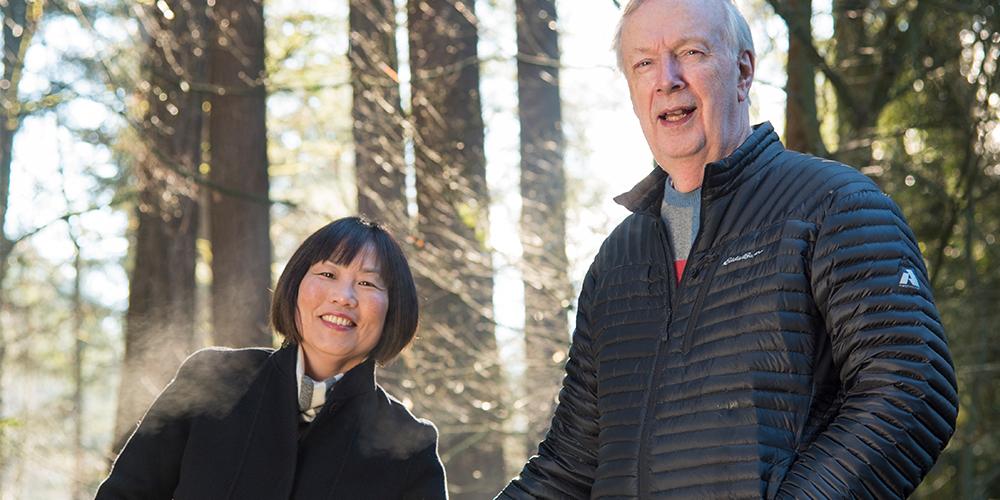 Still waters run deep—this expression might have been coined expressly to describe David and Cathy Hughes.

If you meet David and Cathy at a party, you’ll find them warm, funny and unpretentious. You’ll appreciate David’s dry sense of humor and Cathy’s joie de vivre and you’ll walk away from that conversation thinking that you’ve met two very smart, very interesting people.

And you’d be right—but since this couple is also quite modest, you might not know just how smart and interesting they really are!

Bothell native David, for example, graduated from the Far Eastern and Russian Institute at the University of Washington and then went on to become one of the youngest people to ever enter the career Foreign Service when he first joined in 1961.  After an initial posting in Georgetown (British) Guiana, he was transferred to Hong Kong where he became the first person to achieve a professional level in Cantonese without going to formal language training.

For the next few years, David bounced back and forth between Washington DC, Taiwan and Hong Kong before he left the Foreign Service and ran for office in Washington State’s First Congressional District. He didn’t win, but the First District’s loss was David’s personal gain. He moved to Taiwan to teach in a university there, and met Cathy.

Cathy, born and raised in Taiwan, credits her life-long passion for the arts to attending a performance by the Joffrey Ballet in Tainan as a teenager.  She feels to this day that that initial encounter with the arts was the impetus that led her to leave Taiwan and attend New York University where she worked on advanced degrees in Performance Studies.

In 1980, David reentered the Foreign Service and the couple moved to Guangzhou where David took part in reopening the first U.S. Consulate in China in thirty years. This was followed by a short sojourn in Hong Kong (again), then on to Jakarta, Indonesia and Mumbai, India—all cities that are a hodgepodge of stimulating cultural activities in music, dance and a thousand other arts.

When they finally returned to Seattle, the Hughes were thrilled to discover that the University of Washington’s UW World Series had a huge variety of arts programming, including Asian artists—and in a single venue: Meany Hall. Performances by Mongolian throat singers, and later AnDa Union, reminded them of visits to Mongolia.  Cloud Gate Dance Theater of Taiwan, Akram Khan Dance Company and, of course, Yo-Yo Ma brought old stomping grounds to their doorstep.

Both Cathy and David’s hometowns of Tainan, Taiwan and Seattle perch on the Pacific Rim, and better than most they understand the special shared economic, political and cultural ties between the Pacific Northwest and Asia. To help support an ongoing and thriving conversation between East and West through the lens of the arts, they created the Catherine and David Hughes Asian Programming Endowment, ensuring opportunities for citizens of our community to experience the remarkable and varied artists of Asia for many years to come.