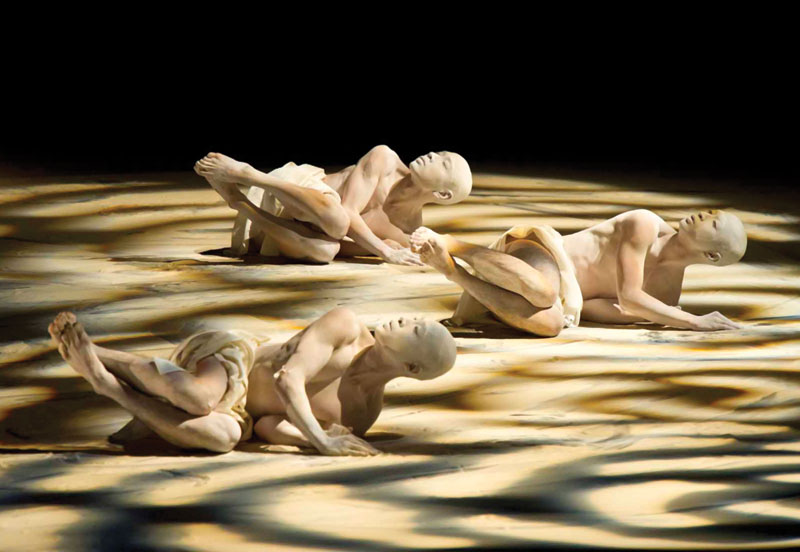 Declared “one of the most original and startling dance theater groups to be seen” by The New York Times, Sankai Juku weaves meticulous spellbinding movement with breathtaking visual spectacle to create deeply moving theatrical experiences. The work of choreographer Ushio Amagatsu and his company are known worldwide and have won countless awards, confirming their status as Japan’s finest example of contemporary butoh. For their Meany Hall performance, Sankai Juku will perform the North American premiere of their latest creation, Umusuna: Memories Before History. The work evokes the essence of duality and unity encapsulated in the Japanese characters for “birth” and “earth” that combine to form the work’s title.

Sankai Juku’s 2015 North American tour is supported by the Agency for Cultural Affairs of the Government of Japan, Shiseido Co., Ltd, and Toyota Motor Corporation.

This presentation of Umusuna is supported by the Japan Foundation through the Performing Arts JAPAN program and made possible by the New England Foundation for the Arts' National Dance Project, with lead funding from the Doris Duke Charitable Foundation and The Andrew W. Mellon Foundation, with additional support from the National Endowment for the Arts.

Umusuna is a very old word originating from ancient Japan that has the same root as ubusuna (one’s place of birth). Ubusu means birth, the beginning of life, or entering the world. The word umusu also embodies the concepts of everything and nothing, existence and nothingness. Na evokes the land, the ground/soil and one’s native place.

All of Sankai Juku’s work has been directed, choreographed and designed by Ushio Amagatsu, the founder of the company. Amagatsu sees Butoh as a “dialogue with gravity.” Using this as a starting point, he has developed his own method of pursuing themes that are universal to all human beings, such as “birth” and “death.”  Amagatsu’s work has been recognized internationally for its originality and utilization of the language of the body, the universal nature of the themes and the aesthetic strength of the expression.

“Dance is composed of tention and relaxation of gravity just like the principle of life and its process. An unborn baby who is floating inside mother’s womb faces to the tention of the gravity as soon as s/he is born. The baby is just lying down in the beginning, and then started to crawl, stand with two feet, and then with one foot… That is why the dance is born with tention and relaxation.” —Ushio Amagatsu, Vogue Hommes 98-99

“I have a vision that always exists inside of me, that is, two plates searching for a balance on the both ends of the scales by rotating and moving up and down. One plate carries culture, each of which has its own unique characteristic that might often appear mysterious and difficult to understand to the others. However, the difference is the basis of the culture, and thus, is important. The other plate carries universality that is common to all human beings. The difference and commonness are constantly moving for seeking a balance between two.” —Ushio Amagatsu, “Dialogue avec la Gravité” in ACTES

Ushio Amagatsu, artistic director, trained in both classical and modern dance before he became immersed in Butoh. For Amagatsu, Butoh expresses the language of the body. In the 1970s, Amagatsu drew mostly on his own individual experience for inspiration. During the 1980s he spent most of his time working in Europe and the inspiration for his work became more universal. In his works, Amagatsu presents an abstract vision of the infinite and explores evolutionary movement. Major themes that he examines are the relationship of the body to gravity and the relationship between gravity, the earth and the environment.

In 1980, Sankai Juku was invited to perform in Europe for the first time. The company went to the Nancy International Festival in France with the firm conviction that Butoh would be accepted. This engagement marked a major turning point and made a name for both Sankai Juku and the term Butoh throughout Europe. The company has toured internationally since 1980 and performed in over 700 cities in 45 countries throughout Europe, Asia, Oceania and the Americas. They have been highly praised in different cultures for over 35 years which is a testament to the universal nature of Sankai Juku’s work. While crossing over geographic boarders and appealing to diverse audiences, the company has been developing the themes of their work while searching for and moving towards new realms. Sankai Juku received the Japan Foundation Award in 2013.

Pre-show Lecture before every performance: The Alchemy of Butoh and Sankai Juku with Diana Garcia-Snyder. Meany Hall Lobby at 7:10pm. More information.