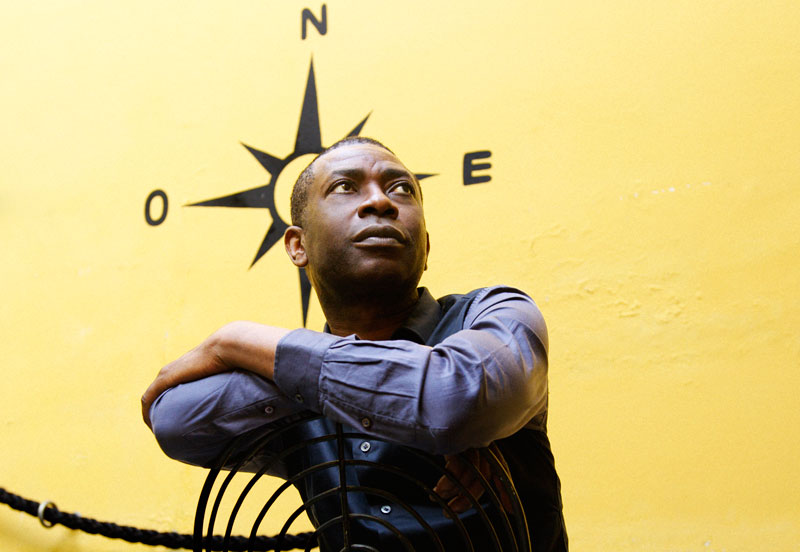 Boldly named “the world’s greatest pop vocalist” by the Village Voice, Youssou N’Dour is more than a musician who has popularized mbalax, a form of Senegalese music. N’Dour absorbs an entire musical spectrum in his work, often filtering it through the lens of genre-defying rock or pop music from outside the culture of his native country. Named “African Artist of the Century” by Folk Roots, N’Dour is also the minister of tourism and culture in Senegal.

Today's popular music in Senegal, known in the Wolof language as mbalax, developed as a blend of the country's traditional griot percussion and praise-singing with the Afro-Cuban arrangements and flavors which made “the return trip” from the Caribbean to West Africa in the 1940s, 1950s and 1960s and have flourished in West Africa ever since. Beginning in the mid-1970s the resulting mix was modernized with a gloss of more complex indigenous Senegalese dance rhythms, roomy and melodic guitar and saxophone solos, chattering talking-drum soliloquies and, on occasion, Sufi-inspired Muslim religious chant. This created a new music which was at turns nostalgic, restrained and stately, or celebratory, explosively syncopated and indescribably funky. Younger Senegalese musicians steeped in Jimi Hendrix, Carlos Santana, James Brown, and the whole range of American jazz, soul music and rock, which Senegal's cosmopolitan capital, Dakar, had enthusiastically absorbed, were rediscovering their heritage and seeking out traditional performers, particularly singers and talking-drummers, to join their bands. (The griots - musicians, praise-singers and storyteller-historians - comprise a distinct hereditary caste in Wolof society and throughout West Africa.) As it emerged from this period of fruitful musical turbulence, mbalax would eventually find in Youssou N'Dour the performer who has arguably had more to do with its shaping than any other individual.

Born in Dakar in 1959, N'Dour is a singer endowed with remarkable range and poise, and, as a composer, bandleader and producer, with a prodigious musical intelligence. The New York Times most recently described his voice as an “arresting tenor, a supple weapon deployed with prophetic authority”. N'Dour absorbs the entire Senegalese musical spectrum in his work, often filtering this through the lens of genre-defying rock or pop music from outside Senegalese culture.

Named "African Artist of the Century" by the English publication Folk Roots at the threshold of the year 2000, N'Dour has made mbalax famous throughout the world during more than twenty years of recording and touring outside of Senegal with his band, The Super Etoile. The Village Voice's Robert Christgau, dean of American rock critics, has boldly called N'Dour “the world's greatest pop vocalist” and finds him “the one African moving inexorably toward the world-pop fusion everyone else theorizes about“. Peter Gabriel, whose duet with N'Dour on In Your Eyes (from Gabriel's 1985 album SO) defined a truly distinguished moment in the history of rock, has proclaimed N'Dour, as a singer, simply “one of the best alive”.

N'Dour solidified his leadership of The Super Etoile by 1979, having retained the essential personnel from earlier incarnations of the group, and he soon thereafter launched an international career with the help of a Senegalese taxi drivers' fraternal association in France and a small circle of supporters in England. The beginnings in Dakar had been more inauspicious. As a willowy teenager, N'Dour had to resort to hustling pirate gigs in the parking lots outside certain of the city's dance clubs to which he and his bandmates had uneasy or no access, his distinctive voice eventually earning him a reputation as a boy wonder and the occasional live amateur-hour slot on the National Radio. As early as age twelve, N'Dour had also been performing at neighborhood religious-ceremonial occasions in the hard-bitten Medina section of the city where he grew up as the first-born child of a pious auto mechanic, Elimane N'Dour, and his wife, N'Deye Sokhna Mboup, herself of griot origin and an occasional performer in the ceremonies of the Medina neighborhoods.

Today, N'Dour and The Super Etoile, acknowledged as Africa's most popular live band on a worldwide scale, continue to play challenging Senegalese roots music with what The Los Angeles Times says is “a joyous precision”. Responding to the introspective side of the group's recording career, which has included such critically-acclaimed major-label albums as SET (Virgin 1990), EYES OPEN (Sony Music 1992) and THE GUIDE (Sony Music 1994), and JOKO (THE LINK) (Nonesuch/Warner Music 2000) as well as the parallel release of dozens of local productions in Senegal, The Guardian (London) has called their music “the finest example yet of the meeting of African and Western music: wholesome, urgent and thoughtful”.

Notwithstanding his international career, Youssou N'Dour's rootedness in Senegalese music and storytelling remains the hallmark of his artistic personality. At once daring innovator and staunch protector of mbalax's unique “Dakar overgroove”, N'Dour manages to maintain a sound which is both characteristically Senegalese and outward-looking, a synthesis of musical languages unmistakably nourished by the musical soil of his homeland. On the foundation of this highly personal sound, N'Dour remains a revered figure in his country and in the ever-growing worldwide Senegalese diaspora. N'Dour continues to make his home in Dakar, but in Paris and New York once each year his Great African Ball, a dance party in the Senegalese style, features the kind of unhinged performances typical of the Dakar nightclubs. In this annual event N'Dour's African patrons in Paris and New York become, for one night, his co-stars, and their celebratory verve finds expression in an extraordinary collective spectacle.

Youssou N’Dour’s long-awaited NOTHING'S IN VAIN (COONO DU RÉÉR), due for worldwide release by Nonesuch/Warner Music in October 2002, is the first album N’Dour has made directly for Nonesuch, the label having released his JOKO (THE LINK) under license. This maiden Nonesuch album purposefully continues the essential ambition of N’Dour’s career – to nurture a flowering of the musical traditions of his native Senegal within an envelope of modernist pop idioms that defy all borders.

Critics and fans have long appreciated N’Dour’s alacrity in weaving disparate strands of Senegalese and other world musics into an infectiously uplifting personal sound. With NOTHING'S IN VAIN, they are in for the treat of N’Dour’s more-liberal-than-ever use of traditional acoustic instruments – such as the twenty-one-stringed kora (West African folk harp), the five-stringed xalam (Senegalese lute) or the single-stringed riti (Senegalese violin) – side-by-side with the more familiar complement of Senegalese percussion (sabar) and chattering guitars made famous by previous recordings.

That N’Dour would continue – by making an album like NOTHING'S IN VAIN – to brave the hydra-headed critique of traditionalists at home, world music purists abroad and nostalgics and pop reductionists everywhere (those who would tailor him down to a stadium-swaying African music icon) is not in the least surprising. Such uncanny insouciance – a resistance to musical conservatism of any stripe – pretty much describes who N’Dour is as an artist. And this is the Youssou N’Dour we already know. It is rather the range of colors, and the gracefulness of their blend, which surprise in NOTHING'S IN VAIN.