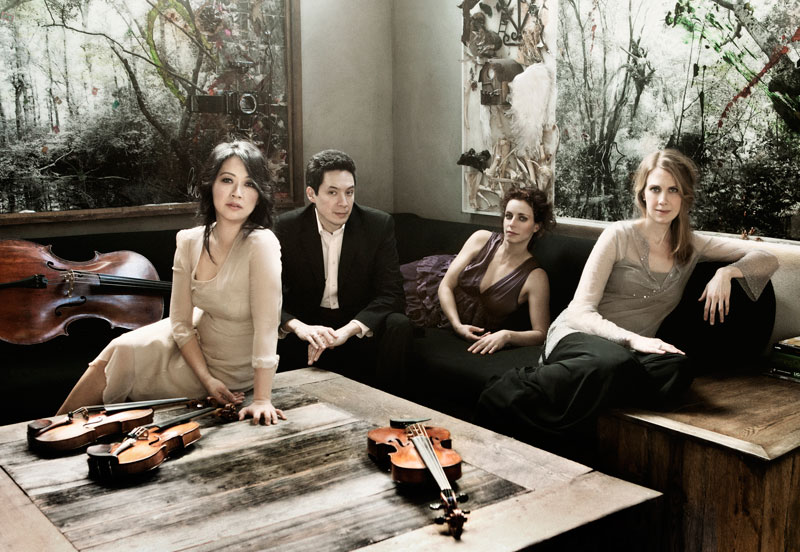 Praised by The New Yorker as “a fresh and vital young participant in what is a golden age of American string quartets,” the Daedalus Quartet has established itself as a leader among the new generation of string ensembles. In the 12 years of its existence the Daedalus Quartet has received recognition from critics and listeners alike for the security, technical finish, interpretive unity and intensity of its playing. The performance includes the world premiere of a new string quartet by UW School of Music composer Huck Hodge, commissioned by Harvard's Fromm Foundation.

Praised by The New Yorker as “a fresh and vital young participant in what is a golden age of American string quartets,” the Daedalus Quartet has established itself as a leader among the new generation of string ensembles. In the thirteen years of its existence the Daedalus Quartet has received plaudits from critics and listeners alike for the security, technical finish, interpretive unity, and sheer gusto of its performances. The New York Times has praised the Daedalus Quartet’s “insightful and vibrant” Haydn, the “impressive intensity” of their Beethoven, their “luminous” Berg, and the “riveting focus” of their Dutilleux. The Washington Post in turn has acclaimed their performance of Mendelssohn for its “rockets of blistering virtuosity,” while The Houston Chronicle has described the “silvery beauty” of their Schubert and the “magic that hushed the audience” when they played Ravel, The Boston Globe the “finesse and fury” of their Shostakovich, The Toronto Globe and Mail the “thrilling revelation” of their Hindemith, and The Cincinnati Enquirer the “tremendous emotional power” of their Brahms.

Since its founding the Daedalus Quartet has performed in many of the world’s leading musical venues; in the United States and Canada these include Carnegie Hall, Lincoln Center (Great Performers series), the Library of Congress, the Corcoran Gallery in Washington, D.C., and Boston’s Gardner Museum, as well as on major series in Montreal, Toronto, Calgary, Winnipeg, and Vancouver. Abroad the ensemble has been heard in such famed locations as the Musikverein in Vienna, the Mozarteum in Salzburg, the Concertgebouw in Amsterdam, the Cité de la Musique in Paris, and in leading venues in Japan.

The Daedalus Quartet has won plaudits for its adventurous exploration of contemporary music, most notably the compositions of Elliott Carter, George Perle, György Kurtág and György Ligeti. Among the works the ensemble has premiered is David Horne’s Flight from the Labyrinth, commissioned for the Quartet by the Caramoor Festival; Fred Lerdahl’s Third String Quartet, commissioned by Chamber Music America; and Lawrence Dillon’s String Quartet No. 4, commissioned by the Thomas S. Kenan Institute for the Arts.  In 2013, the Fromm Foundation awarded a commission to the Daedalus Quartet and composer Huck Hodge; the quartet will premiere Hodge's new work, based on the writings of Jorge Luis Borges, Carl Jung, and the contemporary Buddhist poet Ko Un, in the 2015/16 season.

To date the Quartet has forged associations with some of America’s leading classical music and educational institutions: Carnegie Hall, through its European Concert Hall Organization (ECHO) Rising Stars program; and Lincoln Center, which appointed the Daedalus Quartet as the Chamber Music Society Two quartet for 2005-07. The Daedalus Quartet has been Columbia University’s Quartet-in-Residence since 2005, and has served as Quartet-in-Residence at the University of Pennsylvania since 2006. In 2007, the Quartet was awarded Lincoln Center’s Martin E. Segal Award. The Quartet won Chamber Music America’s Guarneri String Quartet Award, which funded a three-year residency in Suffolk County, Long Island from 2007-2010.

The Daedalus' most recent recording, for Bridge Records, features the string quartets of George Perle, and has been described as "disc with some unforgettable contemporary chamber music" (Classical Lost and Found), and the Strad Magazine praised the quartet's "exemplary intonation and balance."  In the spring of 2014, the Daedalus Quartet recorded Joan Tower's "White Water" (written for Daedalus) as well as her "Dumbarton Quintet" (with pianist Blair McMillen). The quartet’s debut recording, music of Stravinsky, Sibelius, and Ravel, was released by Bridge Records in 2006. A Bridge recording of the Haydn’s complete “Sun” Quartets, Op. 20, was released on two CDs in July 2010. An album of chamber music by Lawrence Dillon (Fall 2010) and the complete string quartets of Fred Lerdahl (Fall 2011) followed.

Among the highlights of the Daedalus Quartet’s 2013-14 season were an appearance at the San Miguel Chamber Music Festival, a weeklong residency at the University of Iowa on the music of composers exiled by the Nazi regime, and the premiere of a new arrangement of Benjamin Britten's song cycle "Winter Words" with the tenor Rufus Muller.

The award-winning members of the Daedalus Quartet hold degrees from the Juilliard School, Curtis Institute, Cleveland Institute, and Harvard University.